Recently, Linux kernel 5.19 received an addition to its variable support for the open source operating system. One of those additions was support for the Raptor Lake-S graphics driver in the PCI ID section of the kernel. Now Raptor Lake-P support has also been added in 5.19.

RPL-P behaves identically to ADL-P from the kernel driver’s perspective.

With the most recent support added to Linux kernel 5.19, the developers have included around 24 new lines of code to enable support for Raptor Lake-P. Several months ago, an identical batch of driver codes were seen for Alder Lake-P activation. This includes Raptor Lake-P PCI IDs 0xA720, 0xA721, 0xA7A0, 0xA7A1, 0xA7A8, and 0xA7A9. These IDs do not reflect the various customization options for Raptor Lake-P, but allow use with future variants and engineering samples which may or may not see actual use. 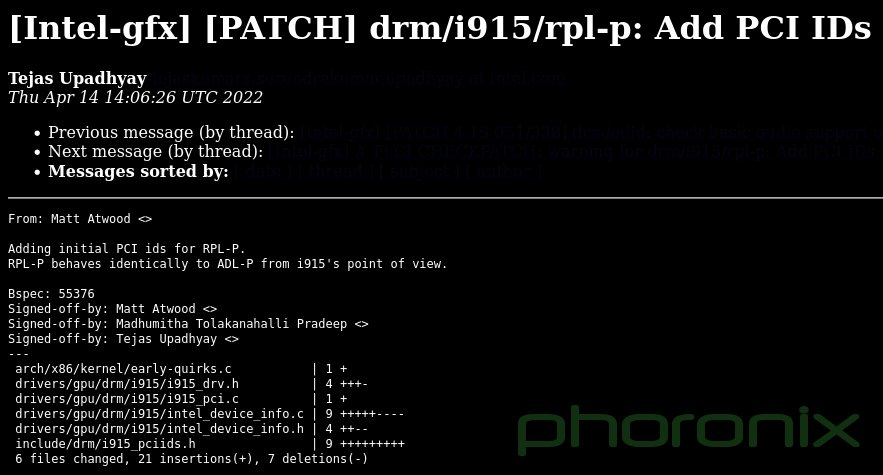 Linus Torvalds recently announced the initial release of Linux 5.18 earlier this month. The latest kernel is a milestone for the Linux community in that it offers support and improvements for all users from all manufacturers. The kernel is the most complete version that most open source users have patiently waited for its release. The next-gen kernel 5.19 will be added to the substantial release with additional support from major manufacturers for unreleased devices. Most companies create their separate open source branches to help keep kernels and upgrades available at a faster rate.

Intel plans to release Raptor Lake around the second half of this year to coincide with the release of the AMD Ryzen 7000 series.