Joint All Domain Command and Control (JADC2) is usually described in terms of the offensive game: the OODA loop, the kill chain, and sensors to effectors. Defense is inherent in the “C2” part of JADC2 but it’s not what comes to mind first.

To use a football analogy, it’s the quarterbacks that get the attention, but it’s the teams with the best defense – against the run and the pass – that usually make it to the championship. 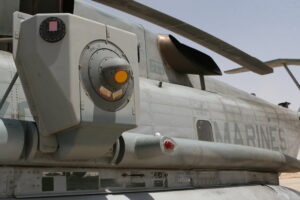 Large Aircraft Countermeasures (LAIRCM), one of Northrop Grumman’s IRCM systems, protects against infrared-guided missiles. It has been installed on more than 80 types of aircraft. Above is a CH-53E installation. Photo courtesy of Northrop Grumman.

In the world of electronic warfare (EW), consider the electromagnetic spectrum as the playing field and the battle that takes place there both offensively through tactics such as targeting and spoofing and defensively through this called countermeasures.

“What’s happened over the last few decades is that the processing power has increased dramatically,” said Brent Toland, industry vice president and general manager of the Navigation, Targeting and Survivability Division, Northrop Grumman Mission Systems. “It makes it possible to create sensors where you can have increasingly wider and instantaneous bandwidth for much faster processing and greater awareness. Additionally, in a JADC2 context, it enables distributed mission solutions that are more efficient and resilient. 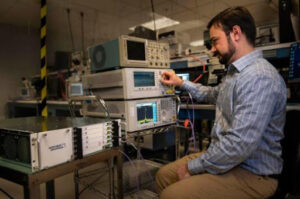 Since the processing is entirely digital, the signals can be adapted in real time to the speeds of the machine. On the targeting side, this means the radar signal can be tailored to make it harder to detect. On the countermeasures side, the response can also be adapted to better counter the threat.

Repel the swarm with dynamic countermeasures

The new reality of electronic warfare is that greater processing capability makes the battlespace increasingly dynamic. For example, the United States and its adversaries are developing concepts of operations for swarms of unmanned aerial systems that have increasingly sophisticated electronic warfare capabilities. In response, countermeasures must be equally advanced and dynamic.

“The swarm usually performs some sort of sensor mission such as EW,” Toland said. “When there are multiple sensors flying on different aerial platforms and, perhaps even space platforms, you find yourself in an environment where you have to defend against detection from multiple geometries.”

“It’s not just about dealing with an air defense system. All around you are potential threats now. While communicating with each other, countermeasures must also rely on multiple platforms to help commanders assess the situation and propose effective solutions.

Such a scenario is central to JADC2, both offensively and defensively. An example of distributed systems conducting distributed EW missions would be a crewed military platform with RF and IR countermeasures operating in conjunction with an uncrewed military platform with air launch effects that also performs some of the RF countermeasures mission. This multi-ship, manned and unmanned configuration gives the commander multiple geometries in which to detect and defend which is not possible when all sensors are on a single platform.

“In an Army multi-domain operations environment, you can easily see where they’re absolutely going to need to be aware all around themselves in terms of the threats they’ll be thrust into,” Toland said. .

It’s a capability that the Army, Navy, and Air Force all need for multispectral operations and dominance of the electromagnetic spectrum. This requires higher bandwidth sensors with advanced processing capabilities to monitor much wider bands of spectrum.

To conduct such multispectral operations, it will be essential to start using what are called mission adaptive sensors. Multispectral refers to the electromagnetic spectrum, including a range of frequencies that cover visible light, infrared radiation, and radio waves.

Targeting, for example, has always been done with radar and electro-optical/infrared (EO/IR) systems. So multispectral in a targeting sense would be a system that can use wideband radar and multiple EO/IR sensors, such as digital color cameras and multiband IR cameras. The system would have the ability to switch between sensors to gather more data, using different parts of the electromagnetic spectrum. 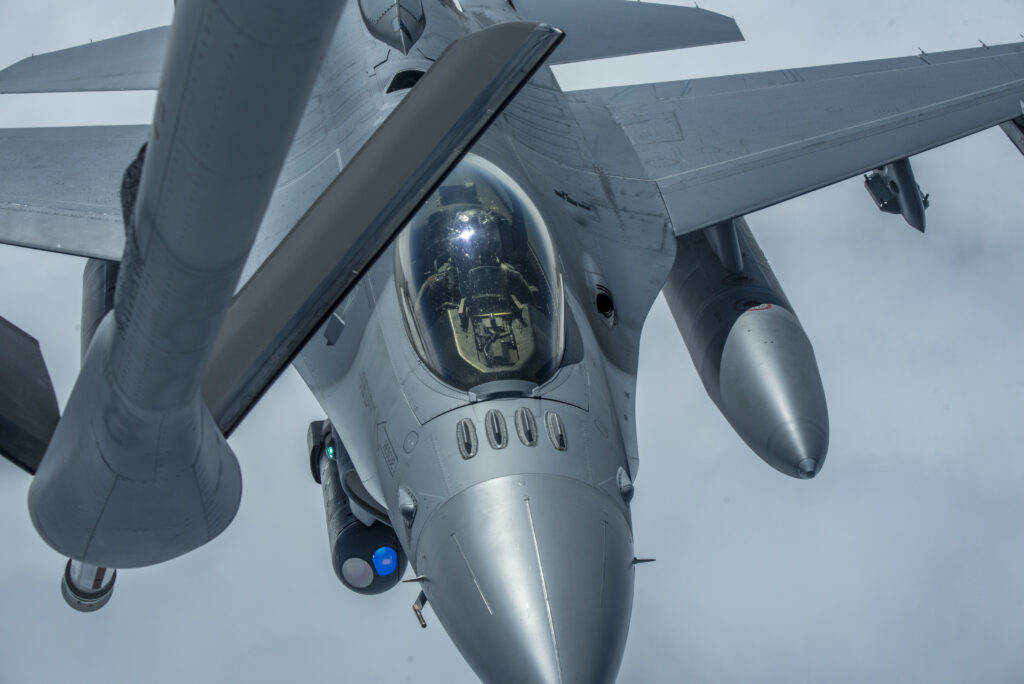 Also, multispectral does not imply that a single targeting sensor has combined capability in all areas of the spectrum, to use the example above. Rather, it is the use of two or more physically different systems, each detecting in its particular part of the spectrum, with the data produced by each individual sensor merged to produce a more accurate image of the target.

Toland described the power of multispectral capabilities through the prism of countermeasures.

“On the survivability side, you obviously try not to be detected or targeted. We have a long history of survivability in the infrared and radio frequency portions of the spectrum, with effective countermeasures for both.

“You want to be able to detect if you’re being acquired by an adversary in either part of the spectrum, and then be able to deliver the appropriate counter technique as needed – whether it’s RF or IR. The multispectral becomes powerful here in the sense that you rely on both and can choose which is the appropriate part of the spectrum to use, as well as the appropriate techniques to counter the attack.You evaluate the information from both sensors and determine which is more can protect you in this situation.

Artificial intelligence (AI) plays an important role in merging and processing data from two or more sensors for multispectral operations. AI helps refine and sort signals, eliminating signals of interest and providing an actionable recommendation on the best course of action.

The AN/APR-39E(V)2 is the next step in the evolution of the AN/APR-39, the radar warning receiver and electronic warfare suite that has protected aircraft for decades. Its smart antenna detects nimble threats over a wide range of frequencies, so there’s nowhere in the spectrum to hide. Photo courtesy of Northrop Grumman.

In a nearly comparable threat environment, there is going to be a proliferation of sensors and effectors, with many threats and signals coming from US and coalition forces. Currently, known EW threats are stored in a database of mission data files that identify their signatures. When an EW threat is detected, the database is searched at machine speed for that particular signature. When the stored reference is found, the appropriate countermeasure techniques are applied.

It is certain, however, that the United States will face unprecedented EW attacks (similar to Zero Day attacks in cybersecurity). This is where the AI ​​will come in.

“In the future, as threats become more dynamic and change, and can no longer be categorized, AI would be extremely useful in identifying what appears to be a threat that your mission data file would not recognize. not,” Toland said.

Multispectral operations and mission adaptive sensors are the answer to a changing world where potential adversaries have well-known and advanced EW and cyber capabilities.

“The world is changing rapidly, and the shift in our defense posture toward close competitors has increased the urgency for us to use these new multispectral systems to engage distributed systems and effects,” Toland said. “This is the near future of electronic warfare.”