Digitization is changing the face of drilling, enabling rig owners to improve performance and reduce operational costs for operators. The value of this transformation is clear, but getting the most out of it requires an investment that not all companies can afford. Nabors has developed technology that not only improves the performance of its own fleet, but can also be deployed on rigs owned by other drilling contractors to deliver similar improvements in safety, efficiency and emissions .

In 2016, recognizing that efficiencies could be achieved through automation, Nabors conceptualized what would become the R801 platform, the world’s first fully automated land platform. The goal of the robotics platform was to demonstrate that automation could be deployed to digitize and execute repetitive workflows to improve efficiency and consistency of operations. Engineers hoped to improve the drilling process and at the same time refocus the work of drillers, who would be able to shift repetitive, manual, daily tasks to automated systems and focus instead on crew mentoring, planning operations and specialization. Activities. Equally important for developers, this technology reduces hazard exposure by keeping personnel away from the rig mast and floor, which are some of the most dangerous places on the rig.

The design team evaluated existing platform operating systems and found that none of the operating systems met their requirements. They set out to develop a rig operating system with a machine layer and a flexible sequencing engine that would allow the drilling process to be tailored to specific field requirements and could easily integrate different equipment components. With this capability, drillers could achieve consistent performance without being restricted to a rigid process, and operators could easily adjust workflows for continuous improvement.

A lot of effort was put into testing full automation capabilities with scenarios that coordinated different machines with multiple actions happening simultaneously. The results laid the foundation for intelligent SmartROS™ platform operating system.

When the R801 began operations in the Permian Basin, it achieved measurable performance improvements, including reduced connection times. Automation has not only speeded up the drilling process, it has also improved safety performance. R801 had no recordable incidents throughout the drill program. The automation minimized the NPT and the high power supply supplied to the platform ensured a low carbon footprint. R801 demonstrated that fully automated land drilling is possible.

Installed on Nabors rigs, the SmartROS™ The rig’s operating system has streamlined drilling operations and created a safer working environment. A system that interfaces with robotics and coordinates activities, such as when a robotic pipe manipulator picks up a piece of pipe from the ground and hands it to a higher drive, predictably performs activities that typically require human intervention. With an automated system, workers are less exposed to hazardous moving parts and spend less time in the red zone, greatly reducing the risk of incidents and injuries.

The Drilling Smart Operating System is a platform for digitizing and automating drilling processes, creating the flexibility to deliver value in a range of configurations. Installed on more than 150 Nabors rigs, the SmartROS™ platform operating system has proven its value as a sequencing engine that reads a set of instructions and issues commands to machines that perform assigned tasks.

The operating system is built on a Linux platform and uses activity-based workflows that are viewable on an intuitive user interface, making customization simple. Since every client is different, the drilling process cannot be invariable. The simple design of this system allows users to drag and drop software to visually sequence each machine. After sequencing is complete, the file is uploaded to a process automation system and executed as instructed.

When the system was first deployed on Nabors rigs, drillers used icons representing each drilling function to interface with proprietary tools that included an automated guidance and directional execution system: SmartNAV™ and SmartSLIDE™. These solutions incorporate collision avoidance software and a rotatable steerable downlink for consistently accurate directional decisions and exceptional wellbore placement. The guidance system, SmartNAV™gives instructions to the directional steering control system, SmartSLIDE™, which automates slip drilling, adapts to unexpected changes in formation, and improves performance by reducing overall cycle time. Nabors has successfully drilled over 1,900 wells and millions of feet using these tools. 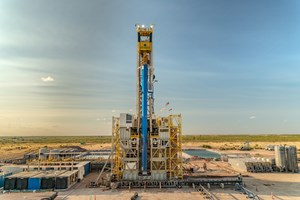 In early 2019, Nabors embarked on the next steps in automating drilling processes with the development of SmartDRILL™, a system that automates the repetitive tasks associated with lowering and descending. Using this process automation system, a driller exercises granular control of drilling equipment through sequences that automate drilling practices in a safe and efficient manner. These sequences orchestrate equipment functions so that the driller simply activates the system and monitors execution, freeing up time to oversee the drilling process, mentor the crew, and monitor the downhole environment. Platforms with this solution have shorter connection times, better connection consistency, and fewer unplanned trips.

The SmartROS™ the platform operating system is independent of the equipment. Designed for use on third-party platforms, it can be adapted to any fleet of platforms, although not all equipment has been standardized. It integrates with any control system to provide all the functionality it allows on a Nabors platform. By early Q3 2022, Nabors had deployed SmartROS™ on 13 third-party platforms and SmartDRILL™ on three platforms, with two more expected to be installed by the end of the quarter.

New equipment can be added easily, so platform upgrades don’t cause extended downtime, and because the system can host third-party applications, it can be deployed across platforms just as easily. forms of competitors than on the Nabors fleet.

Other drilling contractors have their own control systems that the rig must interface with, so the designers have developed a standard interface that allows SmartROS™ to communicate with the sequencing engine, sending commands that can be executed by all machines installed on the drilling rig. This interface is the backbone of process automation.

Although the sequencing can be tailored to each drilling program, the sequences themselves do not define the target setpoints. It is the function of the driller who determines the parameters which dictate the progress of the drilling by developing “recipes” triggering the activities.

The automation framework supports a recipe manager that is controlled by setpoints assigned by the driller. The SmartPLAN™ The system allows the driller to communicate sequence and identify circumstances that alter the drilling process taking into account changes in depth and formation.

Using data gathered while drilling allows asset owners to take the best performing rig and the best settings and apply them across an entire fleet to increase performance without a heavy investment.

Nabors partners with a global oilfield services company to automate communication between SmartROS™ and the service company’s engineering designs to expand rig automation and improve well construction reliability. The objective of this initiative is to improve the interoperability between the well plan and the execution of the well site.

Drilling rig control systems are rapidly evolving from automated to autonomous. Today, more and more machines are automated. The next step is to build smart applications that can optimize ROP, improve tool face control accuracy, and predict failures to optimize drilling and mitigate drilling malfunctions in real time.

Automated engine management is the first of many proprietary AI-based applications that have been successfully deployed, and over the next two years more applications will be introduced to bring the industry closer to truly autonomous operations.